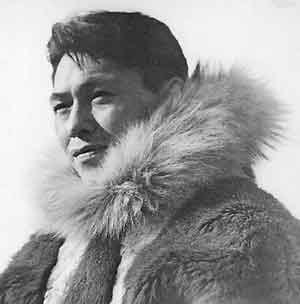 Howard Rock, the son of Sam Weyahok (Uyaġaq) and Emma Keshorna Rock, was born one mile from the village of Tigara (Tikiġaq) near the established Episcopal mission on August 10, 1911. Before Howard was born, Siġvaun, a woman shaman (aŋatkuq) and mother of Emma and grandmother of Howard predicted that “One boy born in the village about the same time will be great hunter, but this son of yours will be a great man.” Rev. Frederick W. Goodman, a volunteer missionary, and a trained medical missionary wrote the prophecy into the Episcopal Church record and baptized “Howard” with the Christian name after Howard Caldwell who had arrived to work at the mission three day after Howard’s birth. Goodman also anglicized Weyahok (Uyaġaq) to “Rock” according to the actual translation.

At the age of fifteen, Howard attended high school at White Mountain Vocational School near Nome, Alaska. There he met and became friends with Mrs. Rolyn Ball, who helped him learn the art of sketching and use of oil for painting. At the age of 22 he was on his way to Seattle and onto Medford, Oregon to apprentice with Max Siemes, an established artist, in exchange for his help on his farm. Howard later studied art at the University of Washington for three years. During World War II, he served in North Africa as a radio operator. Upon his return, he worked in Seattle as a jewelry designer and returned to Alaska in 1961 for a vacation.

In 1962, with no journalism background, Rock founded the Tundra Times at the request of Native Leaders who felt their people needed a voice. Veteran journalist Tom Snapp worked with the Tundra Times until it was firmly established. Funds to start the enterprise came from Dr. Henry S. Forbes of Milton, Massachusetts. Throughout the next eleven years the paper struggled with debt but Rock never gave up. He encouraged the beginning of the Alaska Native movement, championed minority rights, and provided a sounding board for the land claims settlement. Perhaps more than anyone else, he (Howard Rock) helped weld together the frontier state’s 55,000 Natives for their successful years-long fight to win the largest aboriginal land claims settlement in American history, wrote Stan Patty of the Seattle Times. He was their voice; at times about the only calm voice when crescendos of inventive threatened to tear Alaska apart.

He received much recognition both in state and nationally and carried the heavy responsibility of serving on the Indian Arts and Crafts board for the Department of the Interior. In 1940, he was included in the “Who’s Who in Northwest Art,” awarded an honorary doctorate from the University of Alaska in April of 1974 voted “Alaskan Man of the Year,” in 1974 and was “49er of the Year," in 1975. The Tundra Times was nominated for a Pulitzer Prize in 1975. Howard Rock did not live to see the formation of the Alaska Native Arts and its incorporation in August of 1976, just four months after his death.

In the first issue of Tundra Times, the editor Howard Rock spoke of two purposes for the paper. It would be a means of reporting the goals and policies of Native organizations and it would become a source of information on Native issues.

The first issue of the Tundra Times was published October 1, 1962.

Long before today there has been a great need for a newspaper for the northern Natives of Alaska. Since civilization has swept into their lives in tide-like earnestness, it has left the Eskimos, Indians and Aleuts in bewildering state of indecision and insecurity between the seemingly need for assimilation and, especially in the Eskimo areas, the desire to retain some of their cultural and traditional way of life.

Noting the need for information to cope with civilization in an informed manner, the Eskimo Inupiat Paitot organization at its first meeting in November, pointed out:

It is suggested that a bulletin or newsletter be published and circulated every so often to villages about what is being done within the Inupiat organization. This organization should be well established, not to be allowed to die. All the Native villages should be informed what has been accomplished for the good of those villages.

Since the Inupiat meeting, the Athabascan Indians of the Interior Alaska organized at a meeting this past June at Tanana. Therefore we have decided that this newspaper shall serve them as well as other Natives in Alaska.

There are two main reasons for the appearance of the Tundra Times.

First: It will be the medium to air the views of the Native organizations. It will reflect their policies and purposes as they work for the betterment of the Native peoples of Alaska. It will also reflect their aims…their hopes. It will strive to aid them in their struggles for just determination and settlement of their enormous problems.

Second: It will strive to keep informed on matters of interest all Natives of Alaska, whether they be Eskimos of the Arctic, the Athabascans of the Interior, and other Indians and Aleuts of the Aleutian Islands.

We have also realized that an unbiased presentation of issues that directly concern the Natives is needed. In presenting those things that most affect Natives, we will make every effort to be truthful and objective.

Aside from the more serious purposes, the paper will print articles on what it believes to be an extremely important subject, the culture of the Arctic. We will cover whaling, hunting and fishing, the Eskimo dance, the dog-team, the family unit, legends, celebrations, both ancient and current, customs of the past and present and other things that fall in the category of the Arctic culture. We will include articles on the culture of the Indian and the Aleut.

Politically, the Tundra Times will follow a firm policy. It will not support any political party. Its policy will be independent. It will be non-partisan in airing the views of individual candidates. Occasionally, the paper in its editorial columns, may favor a candidate or certain elected officials. If this occurs, it will be because of his stand on Native issues rather than the political party to which he belongs.

A reminder: Natives of Alaska, the Tundra Times is your paper. It is here to express your ideas, your thoughts and opinions on issues that vitally affect you. When you have a subject that you feel needs to be written about, pass that subject along. If you have something to offer such as a good photograph, you think would add to the paper, pass that along too.

Each offering will be carefully considered and much appreciated. They will aid the success of the paper.

And in a financial way, you can help too. Support it by purchasing the products or services of our advertisers. Your considered judgment will, and must, be your guide on political matters. Subscribe to the paper and ask others to subscribe.

With this humble beginning we hope, not for any distinction, but to serve with dedication the truthful presentation of Native problems, issues and interests. The paper asks your fine reception and wishes for success and God Speed.